The RBA starts raising rates – how far and how fast? And what does it mean for investors?

MBA Financial Strategists•Latest Articles•Debt Advice & Mortgages•The RBA starts raising rates – how far and how fast? And what does it mean for investors?

The RBA starts raising rates – how far and how fast? And what does it mean for investors? 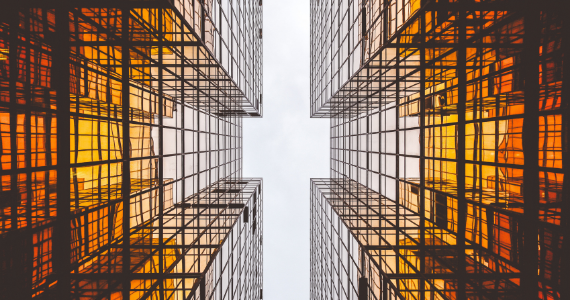 For the first time since November 2010, the RBA has raised its official cash rate – from 0.1% taking it to 0.35%. This was above market expectations for a 0.15% hike and a bit closer to our expectation for a 0.4% move suggesting that the RBA appears to have partly accepted the argument that it had to do something decisive in order signal its resolve to get inflation back down. The RBA also announced it will start quantitative tightening, by allowing its portfolio of bonds to run down as they mature, which along with the ending of cheap funding for banks under the Term Funding Facility will see a significant decline in its balance sheet next year. And its commentary was hawkish, indicating it will “do what is necessary” to return inflation to target and that this will require further interest rate increases.
Banks are likely to pass the RBA’s rate hike on in full to their variable rate customers and deposit rates will also start to rise. Fixed mortgage rates have already moved up in line with rising bond yields in anticipation of higher cash rates – doubling from record lows around 2% a year ago.

Australian interest rates on the rise 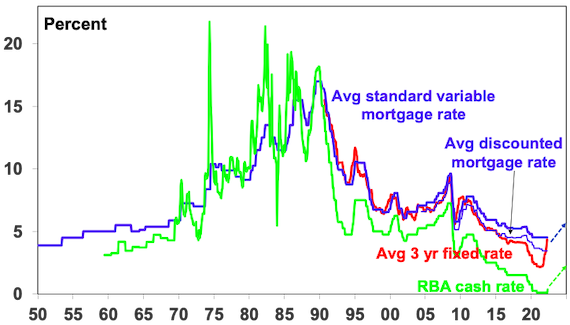 The RBA has now joined central banks in the US, Canada, the UK, NZ, Korea, Norway and Sweden in raising rates – some of whom have started to hike more aggressively with 0.5% moves.

Why the rate hike?

The start of rate hikes has come well ahead of the RBA’s guidance up until early this year that a rate hike was unlikely until 2024. Only a few months ago the RBA conceded a rate hike was “plausible” this year, but it was prepared to be “patient” and then last month it was implying it would wait for March quarter inflation (which we saw last week) and wages data (due later this month). What’s changed is that the jobs market, with just 4% unemployment and inflation at 5.1%yoy or 3.7%yoy in underlying terms, have been far stronger than the RBA expected, removing the luxury of patience and waiting for more wages data. Consistent with this, it announced a downwards revision to its unemployment rate forecasts (to 3.5% by early next year from 3.75%) and big upwards revisions to its inflation forecasts (to 6% for year end from 3.25%) and appears to have become more upbeat on wages growth noting “larger wage increases are now occurring in many…firms”.
While inflation of 5.1% is still below the 8.5% in the US and the circa 7% rates in Europe, the UK, Canada and NZ, it’s been following the other countries higher and, in the near-term, we are likely to see a further rise in underlying inflation with Coles, for example, warning of further significant supermarket inflation. 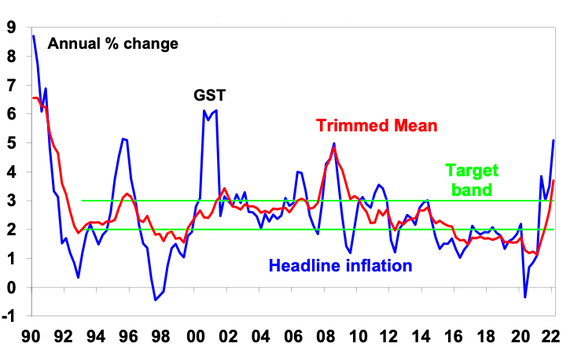 Won’t hiking rates just add to the cost of living?

It’s true that the rate hike will add to “cost pressures” facing households with a mortgage. But tightening monetary policy by raising the cost of borrowing (or money) in order to slow demand growth relative to supply in the economy is one of the few levers policy makers have in the short-term to reduce inflation. Much of the surge in inflation owes to pandemic distortions to global supply and goods demand, made worse by the war in Ukraine and the recent floods, which may reverse to some degree at some point. And the RBA can’t do much about supply constraints. But it had no choice but to act to increase the cost of money from near zero. First, having a near zero cash rate when unemployment is 4% and inflation is over 5% makes no sense. Second, the experience from the late 1970s tells us the longer high inflation persists the more inflation expectations will rise making it even harder to get inflation down again without a recession. Thirdly, the global backdrop now of bigger government, a long period of ultra-easy monetary policy and big budget deficits, the reversal in globalisation and the demographic decline in workers relative to consumers, all point to a transition from the falling and low inflation world of the last 30-40 years to structurally higher inflation. Finally, waiting till after the election would have left the RBA vulnerable to criticism that it was influenced politically, which could call into question its independence and further dent its credibility.

Does this mean that the RBA got it wrong?

After the long period of below target inflation and low wages growth last decade the RBA was right to move in 2020 to focussing on actual, as opposed to forecast, inflation and to adopt more dovish forward guidance. But the messy removal of its bond yield target last November, the surge in inflation and now the far earlier rate hike than its recent guidance indicated, have likely dented its credibility. A key lesson is that its interest rate guidance is based on forecasts which can be wrong, so it’s wise for the RBA not to emphasise it too much as some may have read more confidence into it than was warranted.

How far will interest rates rise in Australia?

In order to bear down on inflation expectations, we expect another increase in the cash rate in June (probably of 0.25% but it could be up to 0.4%), a rise in the cash rate to 1.5% by year end and to 2% next year, which, all things being equal, will translate to an increase in variable mortgage rates of up to 2%. While this will cut into household spending power it should be manageable for most borrowers:

The RBA will only raise rates as far as necessary to cool inflation. It knows that high household debt levels compared to the past means households are more sensitive to higher rates and therefore it won’t need to raise rates as much as in the past to cool inflation. So, it won’t be on autopilot mindlessly hiking & crashing house prices and the economy in the process. Rather, after a few initial hikes, it will likely pause to see what happens before doing more, but rates will not rise to nosebleed levels.
Moving earlier and faster initially should allow the RBA to slow the pace of rate hikes next year. And through next year the combination of fixed rate borrowers seeing a doubling in their interest rate as their fixed terms come to an end and falling home prices exerting a negative wealth effect will start to do some of the RBA’s work for it.

What about the impact on the economy?

While rate hikes will cause bouts of uncertainty and see economic growth slow down to around 2.5% next year from 4.5% this year, we don’t see RBA rate hikes this year as being enough to end the economic recovery and trigger a recession. Monetary policy will still be relatively easy for much of this year at least. It’s usually only tight monetary conditions that result in recessions & we are a long way from that. The strong jobs market will continue to support households, and the household sector as a whole is sitting on around $250bn in excess savings, built up through the pandemic. And don’t forget that since the mid-1990s there have been four rate tightening cycles (1994, 1999-2000, 2002-2008 and 2009-2010) none of which caused a recession.

There is an ambiguous relationship between rising interest rates and the Australian share market. While higher rates place pressure on share market valuations by making shares appear less attractive, early in the economic recovery cycle this impact is offset by still improving earnings growth. The chart below shows the official cash rate and share prices in Australia since 1980, with cash rate tightening cycles shaded. Sometimes rising interest rates have been bad for shares, as in 1994 for example, but at other times this has not been the case. For example, between 2003 and 2007 shares went up as interest rates rose with shares only succumbing in 2008, after multiple rate hikes over several years and with the GFC. 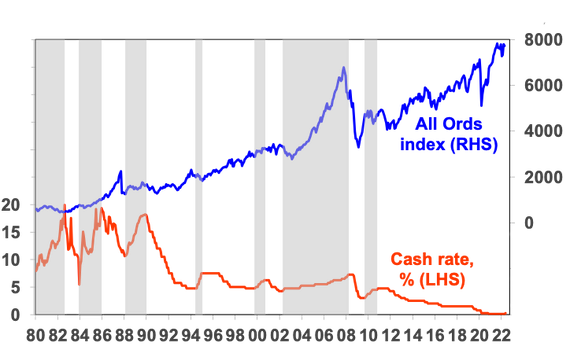 Several considerations are worth noting.
Firstly, rising rates from a low base are normally not initially bad for shares, as they go with improving economic conditions.
Secondly, rising interest rates are only really a major problem for shares when rates reach onerous levels (ie, above “normal”), contributing to an economic downturn, eg, in 1981-early 1982, late 1989 and in late 2007 to early 2008. They are also a problem when rate hikes are aggressive, as in 1994 when the cash rate was increased from 4.75% to 7.5% in four months.
Third, if the RBA cash rate rises to 1.5% by year end, deposit rates would still be less than 2%, so they will still be low relative to the grossed-up dividend yield on shares of around 5.5% leaving shares relatively attractive.
Finally, given the high short term correlation between Australian shares and US shares, what the Fed does is arguably far more important than local interest rates, and this is perhaps a bigger risk given higher inflation in the US.
So, the rise in Australian interest rates to 1.5% by year-end is unlikely on its own to derail the cyclical bull market in shares. But an environment of rate hikes will likely result in a continued period of volatility for shares.

What about residential property prices?

The Australian property market is highly sensitive to the monetary cycle as a result of very high prices and debt to income ratios. Rate hikes in 2009-10 were quickly followed by a period of weaker prices. Macro prudential tightening achieved the same in 2015-16 and then more so in 2017-19. Dwelling price growth has already started to slow, reflecting poor affordability and a sharp rise in fixed mortgage rates. We expect the combination of worsening affordability, along with rising mortgage rates to drive a top to bottom fall of 10 to 15% in average home prices from mid-year out to early 2024.

Important note: While every care has been taken in the preparation of this document, AMP Capital Investors Limited (ABN 59 001 777 591, AFSL 232497) and AMP Capital Funds Management Limited (ABN 15 159 557 721, AFSL 426455) make no representations or warranties as to the accuracy or completeness of any statement in it including, without limitation, any forecasts. Past performance is not a reliable indicator of future performance. This document has been prepared for the purpose of providing general information, without taking account of any particular investor’s objectives, financial situation or needs. An investor should, before making any investment decisions, consider the appropriateness of the information in this document, and seek professional advice, having regard to the investor’s objectives, financial situation and needs. This document is solely for the use of the party to whom it is provided.