Oliver’s Insights – The bond crash of 2021? Seven things for investors to consider

Oliver’s Insights – The bond crash of 2021? Seven things for investors to consider

– Higher bond yields are normal in economic recovery and should not be a major problem for shares if they are matched by rising earnings. But too rapid a rise in bond yields risks driving a deeper correction in shares.
– Central banks want higher inflation but will look through any short-term spike.
– The 40-year downtrend in inflation and bond yields is likely over. But the fundamental backdrop of improving growth, rising profits and still low rates supports the case for solid 6-12 month returns from shares. 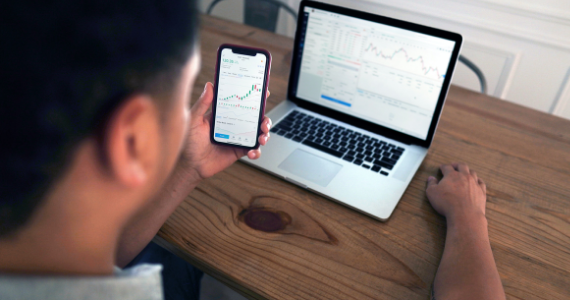 The share market has been described by Warren Buffett as a “manic depressive”. The same can be said of financial markets generally I reckon, and it’s certainly been evident lately. Just a year ago investors were worried about depression and deflation with bond yields and share markets plunging and now they are worried about overheating and inflation with bond yields rising rapidly and causing agitation in share markets! The bond sell off gathered pace over the last week or so. From their lows in March-April last year, 10-year bond yields have now increased by around 0.9% in the US and 1% Australia. (Don’t forget that a rise in bond yields means a fall in bond prices or a capital loss.)
The rebound has been driven by increasing confidence in economic recovery, helped by optimism that vaccines will allow a sustained reopening spurred along by policy stimulus with concerns that more US fiscal stimulus risks overheating the US economy and much higher inflation, ultimately forcing the Fed to tighten earlier than planned. Bond markets are also sniffing out an inevitable spike in inflation in the months ahead as a result of the deflation of year ago dropping out of annual inflation measures, higher energy costs, higher raw material costs generally and supply bottlenecks pushing up goods prices. This will likely see annual headline inflation measures rise to around 3.5% to 4% by mid-year in the US and Australia.
The concern is that the back in bond yields will put pressure on share markets that have rallied partly on the back of low interest rates and bond yields. So how big a worry is it? This note provides some context and the implications for investors.

This occurs because investors switch out of safe haven bonds to invest in growth assets like shares, borrowing increases and saving declines. The next chart shows US and Australian 10 year bond yields since 1990 and highlights several moves higher – in 1994 after the early 1990s recession, in the mid-2000s after the tech wreck, after the GFC, in 2013 after the 2011-12 growth slowdown (the “taper tantrum”) and after the 2015 global growth scare. These increases have ranged from 1.5% to 4.3% (in 1994 in Australia). The latest move is not unusual historically, although it has been very rapid this year.

US and Australian 10 year bond yields 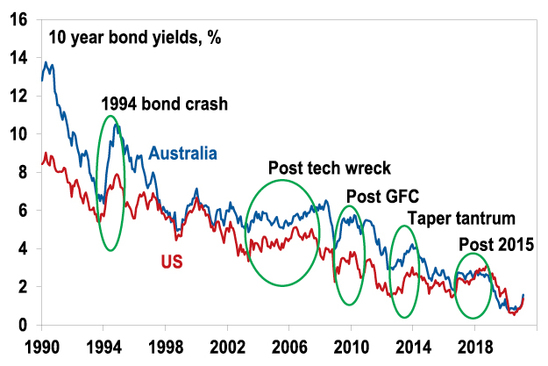 Second, rising bond yields are not necessarily a problem for shares if its matched by a rise in earnings Generally speaking, lower bond yields are good for shares because they make shares more attractive (and justify higher price to earnings ratios) and vice versa for higher bond yields which make shares less attractive, but it’s never quite that simple as it depends on what happens to company profits. For example, the plunge in bond yields a year ago saw share markets initially collapse through late February and March as earnings expectations also fell.
The next chart compares the earnings yield on shares (ie, the inverse of the PE) to the 10-year bond yield. Despite the rally in shares since their lows in March last year and the recent rise in bond yields, shares still provide a decent risk premium over bonds. While the gap has narrowed, it has not declined as much as the rise in bond yields would imply because consensus earnings expectations have risen – by 13% in the US and by 12% in Australia since mid-January. 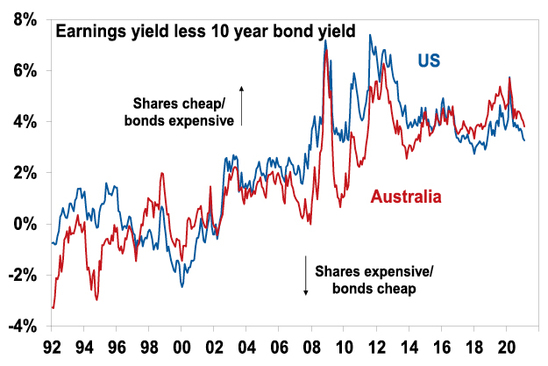 There is also an issue of the speed with which bond yields rise as too rapid a rise in bond yields may start to raise concerns that it will be faster than earnings are able to rise to keep up. We are probably not there yet, but a further rapid 50 basis points rise in yields could trigger a more severe correction.

Third, some sectors of the market are far more vulnerable to higher bond yields than others

Particularly at risk are tech and health care stocks that will see less of a cyclical uplift in earnings and trade on higher PEs. Because these stocks rely on more earnings in the future, they are seen as “long duration” stocks and so they are more vulnerable to an increase in the bond yield used to discount those earnings. Also at risk, but less so, are yield plays that benefited from the “search for yield” flowing from falling interest rates and bond yields – eg, telcos and utility stocks. Cyclical stocks like materials, retailers, industrials and even financials are less at risk as their earnings will rise more with economic recovery and so are more likely to see earnings upgrades.

Fourth, we have seen several spikes in bond yields in the past

Notably, the 1994 bond crash & the taper tantrum of 2013. Both proved temporary but still caused a rough ride for shares in the interim. The situation today is very different to both of these:

Today is a bit different in that the recovery is arguably less advanced than in 1994 or 2013 and central banks are not tightening or contemplating tightening (either via rate hikes or slowing bond purchases), so are not about to effectively rationalise the back up in bond yields (although it’s a risk for later this year).

Fifth, central banks want what bond markets are worried about, ie, higher inflation but will look through any short-term spike

The Fed and RBA fear that bond markets are jumping at what will be a transitory hike in inflation over the months ahead as the deflation from a year ago drops out and higher commodity prices and goods supply bottlenecks impact. So, rather than repeat the mistakes of recent time where central banks tightened only to see growth slow again and inflation remain below target, they would rather look through any short term spike in inflation, and allow the recovery to use up unemployed and underemployed workers and generate higher wages growth before tightening – and this may still be several years away.

Sixth, inflation has likely bottomed and with it the long-term decline in bond yields that’s been in place since the early 1980s

Notwithstanding, central banks view that the rise in inflation over the next few months will be transitory (which I agree with as well), there is a strong case to be made that the disinflation seen since the 1970s is coming to an end and that the long term trend in inflation is at or close to bottoming. Central banks are now throwing the kitchen sink at beating deflation and disinflation just as they threw it at high inflation in the 1980s and early 1990s. There is a good chance – that helped along by massive government spending, governments becoming more interventionist in economies, a reversal in globalisation and a decline in workers relative to consumers – they will win this time, ultimately resulting in a sustained rise in inflation, but that’s probably still a few years away. But it’s consistent with the 40 year bond bull market likely being over, which would mean that the bond sell off is likely to be the start of a longer term rising trend in yields. But as with inflation bottoming, this will take years to play out.

Inflation may be at or close to bottoming 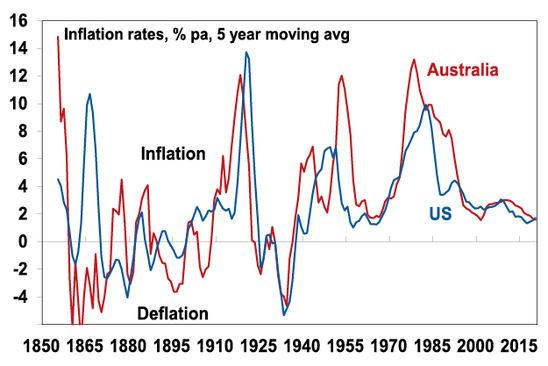 Focussing back to the current cyclical recovery – bond yields could still go a lot higher in the short term before they settle down again and this could cause the long overdue correction in equities. But the big cyclical backdrop of still low underlying inflation and spare capacity in jobs markets – see the next chart – combined with economic and profit recovery and low interest rates is a positive one for growth assets, particularly shares, and this includes Australian shares. 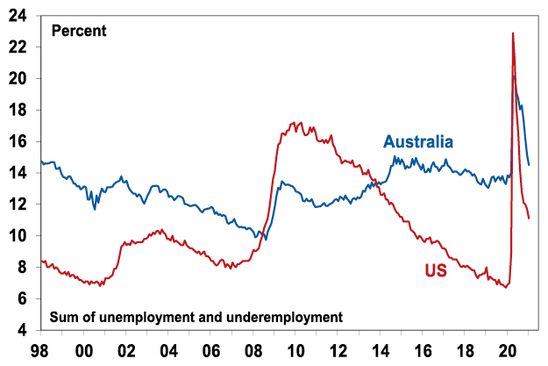 There are several implications for investors from all this.

Important: This information is provided by AMP Life Limited. It is general information only and hasn’t taken your circumstances into account. It’s important to consider your particular circumstances and the relevant Product Disclosure Statement or Terms and Conditions, available by calling |PHONE|, before deciding what’s right for you.

All information in this article is subject to change without notice. Although the information is from sources considered reliable, AMP and our company do not guarantee that it is accurate or complete. You should not rely upon it and should seek professional advice before making any financial decision. Except where liability under any statute cannot be excluded, AMP and our company do not accept any liability for any resulting loss or damage of the reader or any other person. Any links have been provided for information purposes only and will take you to external websites. Note: Our company does not endorse and is not responsible for the accuracy of the contents/information contained within the linked site(s) accessible from this page.