Is this the end of the housing boom?

Is this the end of the housing boom?

Everyone buying into the housing market hopes that their purchase will appreciate over time, while sellers want to pick the top of the market.

Clearly the growth rates in the Australian housing market, particularly in Sydney and Melbourne, peaked some time ago – March last year. But prices have mostly been still rising, albeit at a slower pace. 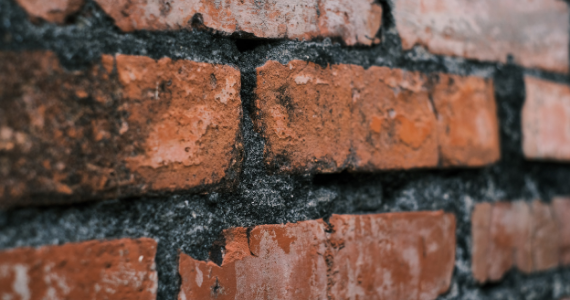 National average property prices now look likely to peak around mid-year and then enter a cyclical downswing. There’s a number of reasons for that. Poor affordability is pricing more home buyers out of the market. Fixed rate mortgages are rising, up 75 per cent from their lows of last year, and they’re still increasing.

From June, the Reserve Bank of Australia (RBA) is likely to push variable rate mortgages higher, and we expect them to rise around one per cent by the end of the year. Also, higher inflation makes it harder to save for a deposit.

Sydney and Melbourne sellers are trying to take advantage of higher prices and solid construction after two years of zero immigration meaning there’s more supply on the market, dragging on prices. And finally, the reopening of the economy means people can once again start to spend more on services, which could reduce housing demand.

Homeowners have done well over the past 12 months, with Brisbane and Adelaide leading the way. Houses have outperformed units and the regions have done better than capital cities and continue to do so as home buyers focus more on quality-of-life considerations.

Average capital city prices are now more than 20 per cent above the previous record high in September 2017 and are up 25 per cent from their lows in September 2020. But there has been a wide divergence between capitals.

Sydney dwelling prices fell for the second month in a row in March, and Melbourne prices were also down. But Brisbane and Adelaide price gains remain strong. Both are playing catch up, having lagged the larger capitals, particularly Sydney in the early part of the rebound. Property demand in Brisbane is benefitting from strong interstate migration, and both cities are seeing less of an affordability constraint. Perth, the worst performing capital over the past 12 months in large part due to lockdowns, is also picking up as the state border reopens.

Overall, the slowing in monthly price growth is seeing annual price growth roll over too. After a period of well above 10-year average growth, simple mean reversion suggests of a further slowdown ahead.

Annual home price growth is now rolling over too 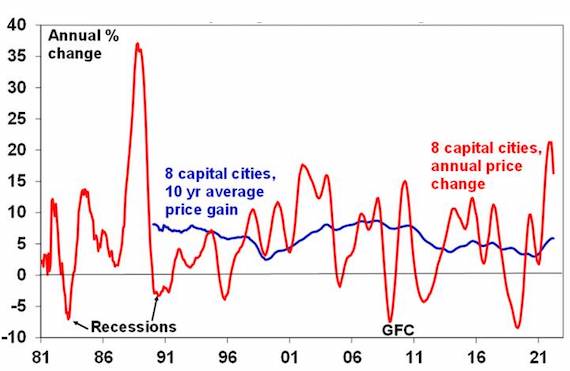 It isn’t surprising that the housing market is cooling, though this cycle it is happening earlier relative to the timing of RBA rate hikes. That’s because of the bigger role ultra-low fixed rate mortgage lending played this time around in driving the boom.

Normally fixed rate lending is around 15 per cent of new home lending but over the last 18 months it was around 40 to 50 per cent as borrowers took advantage of sub 2 per cent fixed mortgage rates. But fixed rates have now been rising since the June quarter last year which has been taking the edge off new home buyer demand well ahead of any move by the RBA.

Top to bottom the fall in prices into 2024 is likely to be around 10-15 per cent, which would take average prices back to the levels of around April last year.

This is likely to mask a continuing wide divergence though. Sydney and Melbourne already look to have peaked but laggard cities like Brisbane and Adelaide, and possibly Perth and Darwin which are less constrained by poor affordability, are likely to be relatively stronger in 2022 with gains likely to persist into the second half of the year.

The main downside risks to our forecasts could come from another big coronavirus set back to the economy, a serious deterioration in the Russian invasion of Ukraine affecting confidence or alternatively faster mortgage rate hikes.

That is a significant risk given the jobs market has tightened more than expected and inflation looks to be rising much faster than forecast with the consumer price index likely to be up by at least 5 per cent over the year to the June quarter.

The main risk on the upside is a rapid surge in immigration post the Federal election to make up for lost immigrants over the last two years, although this is likely to show up initially in higher rents and then higher prices with a lag.

While the national average property downswing unfolding looks like just another cyclical downswing, it’s worth noting that the 25-year bull market in capital city property prices is likely to come under pressure in the years ahead.

The 30-year declining trend in mortgage rates which has enabled new buyers to progressively borrow more and more, and hence pay more and more for property is now likely over. Also, the work from home phenomenon and associated shift to regions may continue to take some pressure off capital city prices.  If you would like to discuss your Mortgage with the practice’s Mortgage Broker Todd Davies simply give the office a call on |PHONE| or alternatively, book an appointment with Todd using his direct online booking link here and select a day and time that best suits you.

Reproduced with the permission of the AMP Capital. This article was originally published at https://www.ampcapital.com/au/en/insights-hub/articles/2022/april/is-this-the-end-of-the-housing-boom
While every care has been taken in the preparation of this article, AMP Capital Investors Limited (ABN 59 001 777 591, AFSL 232497) and AMP Capital Funds Management Limited (ABN 15 159 557 721, AFSL 426455) (AMP Capital) makes no representations or warranties as to the accuracy or completeness of any statement in it including, without limitation, any forecasts. Past performance is not a reliable indicator of future performance. This article has been prepared for the purpose of providing general information, without taking account of any particular investor’s objectives, financial situation or needs. An investor should, before making any investment decisions, consider the appropriateness of the information in this article, and seek professional advice, having regard to the investor’s objectives, financial situation and needs. This article is solely for the use of the party to whom it is provided and must not be provided to any other person or entity without the express written consent of AMP Capital.
This article is not intended for distribution or use in any jurisdiction where it would be contrary to applicable laws, regulations or directives and does not constitute a recommendation, offer, solicitation or invitation to invest.